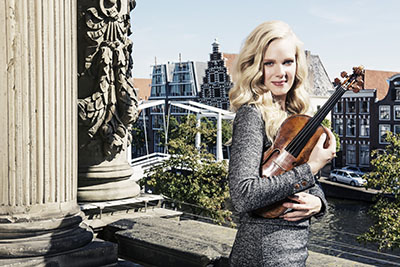 Shippensburg Festival Symphony is an ensemble of professional musicians from Pennsylvania, Maryland, New York, and Virginia.  The orchestra was formed to provide regional audiences with top-quality professional orchestral performances.

Hailed for her “brilliant… polished, expressive and intense” (Cleveland Plain Dealer) and “absolutely stunning” (Chicago Tribune) playing, Dutch violinist Simone Lamsma is respected by critics, peers and audiences as one of classical music’s most striking and captivating musical personalities. Conductor Jaap van Zweden with whom Simone enjoys a regular collaboration, describes her as one of the leading violinists in the world.

With an extensive repertoire of over 60 Violin Concertos, Simone’s recent seasons have seen her perform with many of the world’s leading orchestras.

Simone began studying the violin at the age of 5 and moved to the UK aged 11 to study at the Yehudi Menuhin School with Professor Hu Kun. At the age of 14 Simone made her professional solo debut with the North Netherlands Orchestra performing Paganini’s 1st Violin Concerto, her debut highly praised by the press. She continued her studies at the Royal Academy of Music in London with Professor Hu Kun and Professor Maurice Hasson, where she graduated aged 19 with first class honours and several prestigious awards. In 2011, she was made an Associate of the RAM, an honour given to those students who have made significant and distinguished contributions to their field. Simone currently lives in The Netherlands.

Simone plays the “Mlynarski” Stradivarius (1718), on generous loan to her by an anonymous benefactor.


Please Note:  soloists and performers for all Festival Series performances are subject to change.