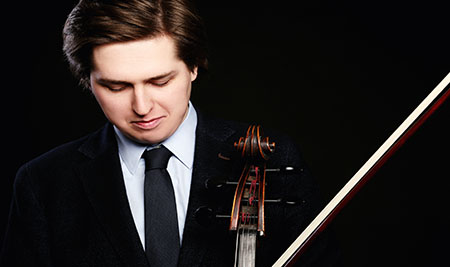 
The Shippensburg Festival Symphony is an ensemble of professional musicians from Pennsylvania, Maryland, New York, and Virginia.  The orchestra was formed to provide regional audiences with top-quality professional orchestral performances.

Maestro Trevino returns for his sixth season with the Shippensburg Symphony Festival Series, a welcome return for his many fans in the region!

One of the finest young cellists of his generation and winner of the 2012 TONALi Grand Prix in Hamburg, Alexey Stadler opened his 17/18 season with appearances in a number of high level engagements across Europe, amongst them Royal Liverpool Philharmonic Orchestra, BBC National Orchestra of Wales, Haydn Orchestra Bolzano and Trento, Orquesta Filarmonica de Gran Canaria, St. Petersburg Philharmonic Orchestra and Slovak Radio Symphony Orchestra.

Born into a family of musicians, Alexey Stadler began to play the cello at the age of four. He began his studies with Alexey Lazko and continued his education at the Rimsky-Korsakov College of Music in St. Petersburg. He has participated in masterclasses with David Geringas, Frans Helmerson, Michael Sanderling, Lynn Harrell, Steven Isserlis and Sir András Schiff.

Alexey Stadler studied with Wolfgang Emanuel Schmidt at the Hochschule für Musik Franz Liszt in Weimar and has a scholarship from the “Oscar und Vera Ritter-Stiftung” and “Alfred Töpfer Stiftung” in Hamburg.

Alexey performs on a violoncello by David Tecchler dating from 1715.


PLEASE NOTE: soloists and performers for all Festival Series performances are subject to change.