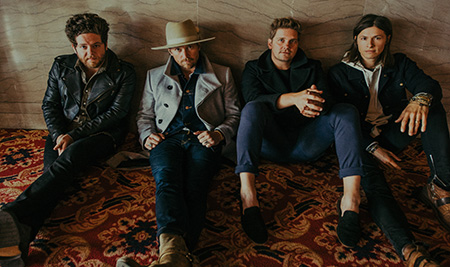 H A R D L O V E is the follow-up to 2014’s Rivers In the Wasteland, which debuted at #3 overall
on the Billboard 200 and spawned the RIAA-certified Gold single “Brother (feat. Gavin
DeGraw).” The hit earned the group their first GRAMMY nomination as well as a pair of
Billboard Music Award nominations.

Last July, NEEDTOBREATHE released their 4-track EP Forever On Your Side (Niles City
Sound Sessions), which includes the single “Forever On Your Side (with JOHNNYSWIM),” and
is the product of a ten day recording session at Niles City Sound in Fort Worth, Texas (the famed
location where Leon Bridges’ GRAMMY®-nominated debut Coming Home was recorded).

NEEDTOBREATHE released their first-ever fully acoustic album – Acoustic Live Vol. 1 – in
November 2018. The album, which was entirely self-recorded, produced and mixed/mastered,
represents over a decade of music from the GRAMMY-nominated band, with songs spanning
across five of their six studio albums.

Opening for NEEDTOBREATHE is artist, Trent Dabbs.  Dabbs' newest collection of songs is entitled Positano. Positano is Dabbs' eleventh album, and if you think he's been busy just writing and recording his own albums over the last couple decades, you're wrong. He's spent a decent portion of his career writing songs for other people, which Dabbs refers to as his passionate day job.  Learn more about Trent Dabbs at www.trentdabbs.com.

This performance is brought to you by Uprise Events Live and the Luhrs Performing Arts Center.