One Night of Queen performed by Gary Mullen & The Works 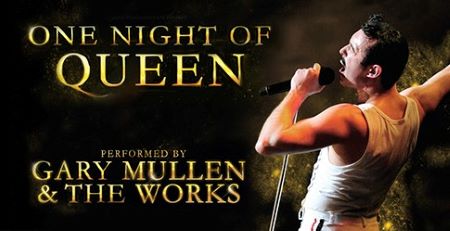 Experience the stage theatrics, showmanship, and music of Rock & Roll Hall Of Fame inductees: Queen! Gary Mullen & The Works have performed One Night of Queen to sold-out audiences around the world, playing more than 2,500 live shows to audiences in over 20 countries, with Gary Mullen’s uncanny embodiment of Queen’s lead singer setting the all-time highest record for fan favorite on TV’s “Stars in Their Eyes.”

One Night of Queen has played at London’s Hyde Park (twice) as a featured attraction during the prestigious BBC Proms concert series in front of enthusiastic crowds of over 40,000 people, and amazingly have performed at many of the same venues that Queen has performed at around the world.

The show DOES go on and this show WILL rock you!